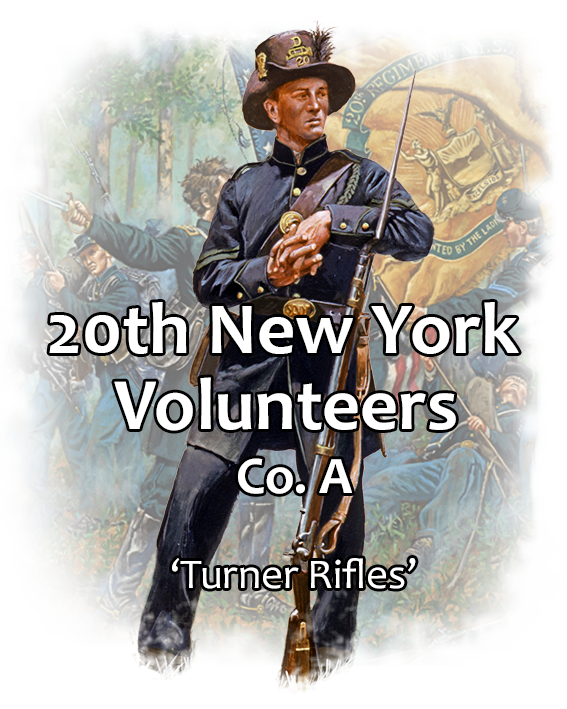 Greetings, Soldiers of the Union!

The 20th NY is an English and German speaking Regiment which places great value on disciplin, friendliness, trust and cohesion. We really like to be historically accurate so we use historical accurate Commands and Ranks. You can enlist at the bottom of this Thread.

"The core of a soldier is moral discipline. It is intertwined with the discipline of physical and mental achievement. Total discipline overcomes adversity, and physical stamina draws on an inner strength that says drive on"

The 20th New York was not engaged in major combat again until the Battle of Antietam on September 17, 1862. The regiment incurred heavy losses, but their performance during the battle earned the unit praise from their superior officers.

Their action in checking the final Confederate counterattack near Dunker Church even earned the praise of the observer who had criticized their flight at White Oak Swamp.After the war ended, the veterans of the 20th New York would dedicate two separate monuments to commemorate the actions of the unit at Antietam.

Normally the Insignias were in a bright blue, as you can see by the CO's,
but the 20th New York Volunteers Co.A. always wanted to be a Skirmish Unit so they changed the colour to a dark Green.

click for the historical Roster of the 20th NY.

If you are interested in joining the 20th New York Volunteers Co. A. just fill out the application above or, if you have any questions, feel free to contact me on steam.

See you on the Battlefield Gents !

This Thread is still work in progress